“Four lies the government is telling about the Broadcast Digital Migration”, Statement issued by the SaveFreeTV campaign 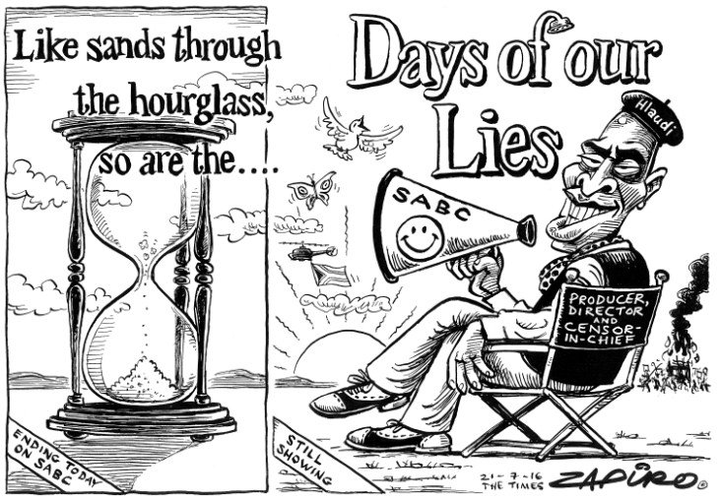 On 8 March the #SaveFreeTV issued a statement demanding that the government delay the disconnection of millions of people’s analogue TV reception. Later the same day the Department of Communications and Digital Technologies (DCDT) responded in a statement full of inaccuracies and misrepresentations.
Here we set the record straight on the four most notable lies that the DCDT is telling South Africa about the Broadcast Digital Migration (BDM):
Truth #1: The analogue signal has not been completely switched off in any province

The DCDT claims that analogue TV signals have been successfully switched off in the Free State, Northern Cape, North West, Mpumalanga, and Limpopo (as the Communications Minister has also repeatedly claimed). In fact, only SABC transmissions were cut off while eTV kept broadcasting. This resulted in eTV’s viewership increasing by 40% in the Free State alone.

In reality, BDM communications efforts have been limited to things like a ticker line on SABC TV channels and an SMS and social media campaign. These efforts have failed to entice audiences with what digital TV has to offer in terms of content and channels and motivate people to migrate to DTT (not just to pay-TV). Furthermore, funding that was promised by the government to community TV stations in November last year to support local campaigns to assist in the migration process has still not been disbursed.

Truth #3: Government’s TV migration process serves Multichoice/DSTV and undermines the public interest
The DCDT claims 10.5 million households have “self-migrated” to digital TV. We assume it is referring to people that have moved onto pay-TV (primarily MultiChoice/DSTV). This is no cause for celebration as it has only served to entrench the MultiChoice monopoly while the cost of pay-TV is out of reach to the majority of South Africans. Government is out-of-touch with what is happening in communities and speaking purely from a position of privilege ignores those who cannot afford pay-TV.

For over a decade the government’s handling of digital migration has amounted to a massive privatisation of the communications system. The planned analogue switch-off could be a critical nail in the coffin of public broadcasting as those that can afford it will continue to abandon public TV services (SABC & community TV) and move to private companies like MultiChoice, OVHD and Netflix. Government is pushing viewers to migrate to any digital service rather than specifically to DTT, meaning that the pay-TV platforms will benefit from the lack of digital reception devices in the market at the expense of free-to-air channels on the DTT platform.

This will further entrench inequality in South Africa between those spoiled for choice and those left without any TV access at all. This rolls back the basic rights to free expression and access to information that the Constitution mandates the government to “progressively realise”.
Although at present SABC and community TV channels are available on DSTV, there is no guarantee that MultiChoice will continue to carry the community channels since there is no must-carry, must-pay provision for these free-to-air broadcasters on the dominant pay-TV provider.
MultiChoice faces allegations of corrupting the Zuma administration (here, here & here) – but why isn’t Communications Minister Khumbudzo Ntshavheni putting the people’s interests ahead of MultiChoice?

Truth #4: A democratic government should welcome public participation
The DCDT accuses #SaveFreeTV of alleging a “looming blackout” and other so-called “non-facts”. The DCDT statement aggressively dismisses the concerns of the campaign as baseless and mischievous, and to be treated with contempt.

Nowhere in our statement have we mentioned a “looming blackout”. All the figures quoted are based on those available from the Broadcasting Research Council (BRC) through the measurements of A.C. Neilson which measures television audiences in terms of ‘television households’ and not Statistics SA figures. The BRC figures are the standard which broadcasters and advertisers use to measure television audiences.
The #SaveFreeTV figures for TV viewers affected by the BDM are arrived at as follows: According to the BRC some 36% of TV households in SA are dependent on analogue TV signals, which equates to roughly 5.7 million free-to-air TV households that will be affected by the ASO. According to Statistics SA the average household occupancy is 2.51 people, so multiplying 5.7 households by 2.51 household members gives us a figure of over 14 million free-to-air TV viewers.

While MultiChoice and OVHD report receiving thousands of new applications every day, the roll-out of DTT reception equipment is proceeding very slowly. Of the 1.5 million DTT decoders that the government had manufactured, less than half (616,871) have actually been installed countrywide. In Gauteng the figure is only 115 decoders, and in the Western Cape it is only 62 (figures from DCDT report to parliament on the BDM, February 2022).

At the start of the BDM in 2008 the government estimated that some five million households would qualify for these decoders; this was later reduced to three million following lackadaisical uptake in the Free State, the second province after Northern Cape to have the SABC analogue transmissions switched off. Even if all of the existing stocks of government decoders are installed, that still leaves some 4,2 million households that have to either sign on to pay-TV platforms, buy a new digital TV set with integrated DTT tuner or find a local or imported grey-market (not SABS approved) DTT decoder.

It is unacceptable that a democratic government would adopt this belligerent tone when engaging with citizens who are deeply concerned about the future of free-to-air TV and the impact its loss will have on the majority of our people. The #SaveFreeTV campaign, along with the free-to-air broadcasters, merely wishes for a digital migration that is handled in a responsible and effective manner which preserves free-to-air television and which prepares the majority of this audience to opt for DTT reception rather than pay-TV services; and that this is done in a way which ensures that millions of South Africans are not left behind by a premature ASO. These aims do not deserve the contemptuous and dismissive response that the DCDT has opted for.

Both elected politicians and government officials are servants of the people and should conduct themselves as such. The Constitution and Administrative Justice Act oblige the government to engage in meaningful consultation with those affected by its decrees and legislation. The Communications Ministry is falling desperately short in these legal commitments.

The #SaveFreeTV campaign wants to see the speedy conclusion of the digital migration project. But this cannot be done at the expense of millions of South Africans and the future of free-to-air TV.

We expect the government to engage us constructively to find a solution to the looming crisis. The arrogant dismissiveness expressed in the DCDT statement does not serve South Africa.

Image courtesy Zapiro
(we cannot go back to those days of Hlaudi….comment by webmaster)