BMF – Reflecting back we ask: Has anything changed? 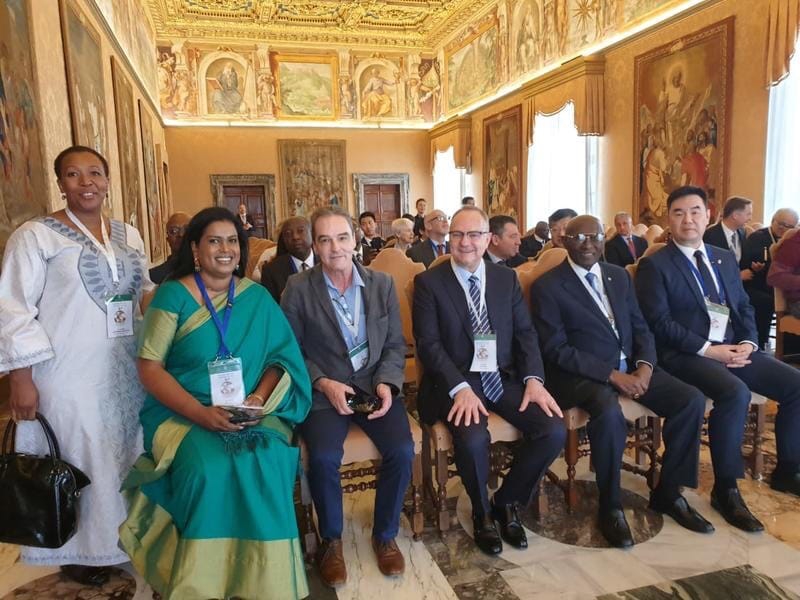 Just over two years ago, the Executive Director of the Bench Marks Foundation as part of Church and Mining met with the Pope. Their concern was the power and conduct of the Chief Executive Offices (CEOs) and Corporations in general. Reflecting back we ask: Has anything changed?

Message of Pope Francis the Mining for the Common Good- Vatican City 3rd May Mining CEO’s and Church representatives (original article dated 9th May 2019)“Economic powers continue to justify the current global system where priority tends to be given to the pursuit of financial gain, which fail to take the context into account the effects on human dignity and the natural environment”. Vatican statement, 2019 – Pope Francis.
It is often said that the best kept secrets of the Catholic Church are the social teachings going back to 1892. The social teachings touch on economics, political environment, the ecological crisis and global warming and of course the poor, marginalised and those most vulnerable. The central message of the social teachings is always the integral development of the human person, human dignity, solidarity, subsidiarity and a meaningful existence and that production should be at the service of people and not vice versa.
The latest social teaching, called Laudato Si’, a papal encyclical, of the Catholic Church was put to 30 mining CEO’s and to 30 church leaders, coordinated by Cardinal Turkson, of the Dicastery for Promoting Integral Human Development of the Holy See. Representatives from across the world attended, including South Africa.

This all begun in 2013 when Anglo Americans CEO Mark Cutifani along with other mining CEO’s approached the Holy See asking for direction due to the bad image of mining globally. This resulted in UK, South Africa, and Latin American countries having their own Church and mining dialogues. Mining was told to promote the common good and meaningful existence.
It seems mines want to gain some legitimacy but simultaneously are faced with the problem of communities who no longer want mining. Communities bear the biggest impacts, from health to livelihoods destroyed. At the meeting, the Latin American Church and Mining Network put on a full display photo of 189 people killed in the Vale tailings dam disaster in Brazil that could have been avoided.
But it was up to Pope Francis who addressed the gathering to clearly give the meeting direction. He welcomed the dialogue then relayed this message to the participants. Speaking about the fierce and savage nature of the capitalism he said, “The precarious condition of our common home has been the result largely of a fallacious economic model that has been followed too long. It is a voracious model, profit orientated, short-sighted, and based on the misconception of unlimited economic growth. This insatiable, unquenchable and uncontrollable greedy model of the present economic system was challenged, calling on all to do something. Stating that although we frequently see the disastrous impacts on the natural world and in the lives of people, we are still resistant to change. “Economic powers continue to justify the current global system where priority tends to be given to the pursuit of financial gain, which fail to take the context into account the effects on human dignity and the natural environment”.

He went on to say that the market itself cannot guarantee integral human development and that environmental protection cannot be assured solely on the basis of financial calculations of costs and benefits. “We need a paradigm shift in all our economic activities, including mining. Mining like all economic activities, should be at the service of the entire human community” and that “consensus should always be reached between the different stakeholders, who can offer a variety of approaches, solutions and alternatives. And that the involvement of the local community is important at every phase of mining project.” “The local population should have special place at the table” going on to say that communities are concerned about their own future and that of their children, “and can consider goals transcending immediate economic interests.” Thus, reinforcing the right to say no and the rights to say yes to alternative forms of development.
On indigenous communities, Pope Francis went on to say, that “they are not merely one minority among many, but should be the principal dialogue partners, especially when large projects effecting their land are proposed. These vulnerable communities have a lot to teach us.” “For them land is not a commodity but rather a gift from God and from their ancestors, who rest there, a sacred space with which they need to interact if they are to maintain their identity and values”. Stating that these are fragile communities and pressure is being put on them to abandon their homelands to make space for mining which is undertaken without regard for the degradation of nature and culture.

Emphasising respect for the fundamental human rights and the voices of these communities, stating that mining should be at the service of the human person and not vice versa and that these rights of communities are sacred and inalienable.” Stating that mere corporate social responsibility is not sufficient.
“By ‘extractivism’ we understand an unbridled tendency of the economic system to convert goods into capital” going on to say that extracting the greatest amount of materials in the shortest space of time and converting them into products that others will market and use but where nature will receive in the form of polluting waste is a consumerist loop that is being generated at ever greater speed and ever greater risk. Pope Francis went on to denounce this throw away culture and stating that we need circular model of production capable of preserving resources for present and future generations. Again, emphasising that we need to limit as much as possible the use of non-renewable resources, moderating consumption, maximising their efficiency. Pope Francis position was that we need a circular economy, an economy of proximity, whereby local economies develop strongly, but with moderation, emphasising recycling and reuse, being vital to save our common home, the earth.

Ending he quoted bishops from Latin America, that you may “analyse, interpret and discern what are appropriate or inappropriate extractive activities in the territories; then propose, plan, and act to transform our way of life, to influence the mining and energy policies of states and government and that of companies dedicated to extractivism all for the purpose of achieving the common good and genuine human development that is integral and sustainable.” Once again stating that the concern is the future of our common good, the future of our children, and future generations. “We need to see that what is at stake is our common dignity. Leaving an inhabitable planet to future generations is, first and foremost, up to us.”

Whether this message got through to the mining companies present is doubtful, as their economic model flies in the face of the common good. Pope Francis message that communities should be the first at the table and his challenge of the present economic model to put people first is a huge challenge to an industry focused on short term financial gains, but at a cost to wellbeing of people and the natural environment.
The latest encyclical talks to all of us, but especially the extractivist industry. Pope Francis emphasis on going beyond corporate social responsibility, saying much more is needed and that ultimately mining companies need a paradigm shift; that they need to listen to civil society and communities and alternatives; learn from indigenous peoples who take care of the land; and emphasising strongly the centrality of local impacted communities in decision making. Often citing the sustainable development goals of the United Nations. “Respect for fundamental human rights of the members of local communities and those who champion their causes are indeed non-negotiable principles”. This was the key message delivered by Pope Francis in Rome to 30 mining CEO’s and Church leaders, including activist church groupings on mining.

However, six years have passed since the first discussions and although we hear some ramblings about change and listening by the industry, they have not yet fully internalised the messages given to them. Given global heating, water pollution, net biodiversity loss, the rapacious nature of the present economic model, and time running out, so much has to be done in such a short time frame. But mining short-termism approach and the global catastrophe means we all face a huge challenge to bring change now.

We thus challenge Anglo American, De Beers, Anglo Gold Ashanti and all present to concretely in every phase of mining project to involve communities, and civil society organisations who offer a variety of alternatives, solutions, and approaches, as well as respecting community’s right to say no and the right to self-determine their destinies.

Nevertheless, there are things the industry could do now. We need to level the playing field between mines and communities, by addressing skewed power relations. Concretely, this means the industry should support the Bench Marks and civil society initiative instrument, called the Independent Capacity building Fund (IFC) that addresses skewed power relations, allowing communities more knowledge and informed decision making. Secondly, to adopt the civil society supported Independent Problem Solving Service using impartial facilitators to resolve conflicts that lead to developmental outcomes. “Dialogue is not possible in an unequal power relationship” and that “Dialogue amongst equals opens ways to solutions.” This is how legitimacy is attained. Only when mines fully engage with fragile communities in ways that allow negotiations between equals will engagements like this bear any fruit and perhaps lead to an economic model that is fairer, equitable, respectful of human dignity and human rights and not harmful to the natural world.